Our outdoor film series continues the rich cultural history of the community – the classic theaters of Adams Morgan were once the place to go to see first-run Hollywood films. Movie Nights brings residents and visitors together, activating the Adams Morgan neighborhood.

This year’s series focuses on movies that were filmed in DC, including two that were partially shot in Adams Morgan (Punk the Capital and In The Line of Fire). We’ll have a family-friendly feature (Night at the Museum: Battle of the Smithsonian) and will also be screening All the President’s Men on the 47th anniversary of President Nixon’s resignation. We’ll also be showing the blockbuster Wonder Woman 1984, most of which was filmed in and around the District of Columbia.

Our movie series attracts thousands of people for one of Washington’s favorite summer traditions: films under the stars. 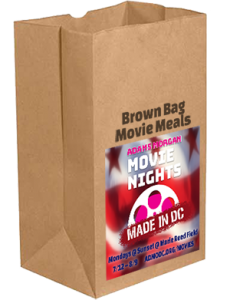 Special deals just for movie-goers! Call to have your food ready to go!

Choice of 2 Wraps (comes with same side choices as regular menu):

Filming Locations for all Five Movies